Icons of Theia Play to Earn Game: Everything you Need to Know

Icons of Theia bring players a fantasy world known as Theia. Players fight each other using tactical and strategic matches to capture the Aurora continent. The first game is free-to-play using a 1v1 tactical strategy. It is across between Fire Emblem, League of Legends, and Chess.
Icons of Theia allows you to get into the blockchain gaming world. Apart from engaging you 100%, it is an asset investment. We intend to ensure you have fun and use easy-to-understand strategies and tactics to earn in blockchain as crypto games creators. Theia is the home to various diverse factions, and everyone is fighting to take control over the crystals that appeared mysterious in this alternate world.

The Crystals are big and float around. They give players increased abilities or powers, making them semi-gods. When someone becomes this powerful, they are referred to as Icons. These people who control Crystals are influential, and the fate of Theia world is in their hands. But there are alliances formed to preserve the highly valued crystals from enemies.

In the Icons of Theia game, participants take turns to move their Icons or characters along with the map and attack enemies. Your primary purpose is to achieve neutral objectives to destroy your enemy’s tower.
You have to think faster and out of the box to outdo your opponent. Start by placing your forces strategically and always take advantage of your opponent’s weakness. While the Icons of Theia game’s idea is not 100% new, it is intricate with comes with some easy-to-follow rules.
Every player starts by drafting five characters. You get them from the Icons’ pool and position them on the Start Zone. Your team consists of characters with different abilities and stats that give them extraordinary strengths and shortcomings. So take your team to choose members of your team.

Every character features a reliable speed stat that determines when to make a move. As you play, you can only move your characters to a certain distance before attacking the enemy near them. The best way to defeat your enemy is to bring down their tower behind your opponent’s lines. However, your enemies can always get back to life in the tower’s health pool. The only way to eliminate them is to deplete health in the pool.

New players have an easy time because the rules are easy to understand. However, you must learn the concepts to follow when introducing multiple layers. They include knowing how to manage your resources, make reward and risk decisions and know what objectives to prioritize while dealing with various weaknesses in your characters. 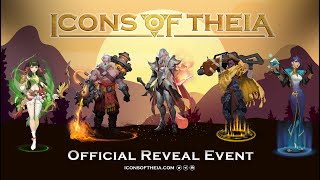 Your team should have a combination of unique abilities to allow interesting combos. Avoid using your resources to ensure you have enough to defend your team or attack when needed. If you divert your resources to objectives, your team becomes vulnerable to attacks.

There are various resource constraints that a player will need to manage and decide when to use. These resources must be rationed carefully to have enough resources to attack or defend at crucial moments. But diverting too many resources to objectives can leave you vulnerable to attack. Also, use particular areas such as the Jungle, invisible to your enemy. This gives good opportunities to sneak and attack while keeping your team safe.

Tokenomics & NFTs in Icons of Theia

For you to buy and own items in the Icons of Theia, we have Non-Fungible Tokens. The primary NFTs used in this play to earn game include skins, sigil forges, Icons, and skins. We also have fungible tokens, including Crystals of Theia or $COT and Essence of Theia or $EOT.

Total: (2)
Rating
(3/5)
Submit
When submitting my score I agree that my IP will be stored to prevent abuse
Read Also: