Solsworn is one of the very few crypto-based games that try to bring crypto into the MMO world. This is a difficult and comprehensive undertaking that not a lot of games have tried so far. MMOs are complex, complicated games that require a lot of different interactions. They incorporate elements that can be difficult to replicate on the blockchain, not to mention combining elements of on-chain and off-chain interactions.

Other genres such as card games are much ‘easier’ in that they follow a simpler structure. Despite that, MMOs are incredibly popular, so combining the genre with NFT gaming was a must anyway – all that remains to be seen is which game will become the WoW of crypto gaming. Solsworn would certainly like to when they release their alpha version in January 2022.

So far, supporters and fans can find an ongoing metagame event in Discord, where they are building their community and releasing up-to-date news on updates and changes to the upcoming schedule and game.

In order to play, users will need a character – that character will be an NFT, which means that Solsworn isn’t completely free to play – users need to mint themselves a character first. To play at all, they’ll also need a crypto wallet compatible with Solana – to this end, the game already supports options like Phantom, Slope, Solflare, Ledger, and Sollet, with potentially more to come.

The native token will be $SWRN, an SPL token used within the game. This crypto game itself will be based on the Solana chain. That token will be used to bid on optional in-game NFTs such as land purchases, vanity items such as skins, and more – and you’ll also be able to trade the token for ‘time’ in whatever capacity the creators have in mind, as they’re quite vague about that. 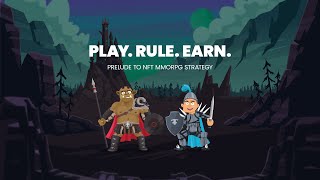 Beyond the obvious, the game will feature several elements we’re all familiar with from MMOs – champions, provinces, alliances, diplomacy, trading, farming for resources, and more – and especially regarding land ownership and alliances, users will have to deal with things like non-aggression pacts, trade agreements and more. It’s possible to go to war or solve smaller disputes in fisticuffs as well as going the complete other way and building a secret undercover spy network through which you trade info.

There are character classes like spies, thieves, assassins but also others such as warriors, archers, and mages. Characters at launch come in two factions – humans and orcs. More may be added later, but to start, those are the two character sets available. There are of course benefits to early adopters and especially the now sold-out human character holders, such as discounts for orcs, early access, and airdrops when the game formally launches.