Your Comprehensive Guide to Hearthstone Betting

In the past, digital card games were a very niche genre. Sure, some of them attracted a cult following, and others even managed to sustain a pro scene. But it wasn’t until the arrival of Hearthstone that digital card games truly became mainstream.

Released in spring of 2014, this Blizzard Entertainment title merged the strategic aspects of the genre with colorful graphics, fluid animations, and the immersive lore of the Warcraft franchise.

This made Hearthstone an instant classic, and hundreds of thousands of gamers picked it up as their favorite pastime. And while Blizzard never envisioned this title developing a competitive scene, the demand for tournaments was strong enough that the community organized them on its own.

Nowadays, Hearthstone is an esports juggernaut with dozens (if not hundreds) of tournaments taking place every year. And it’s common to see Hearthstone matches at the top of esportsbook markets.

Granted, the scene might seem confusing if you’re just looking at it from the outside. Don’t fret, though, because our esports experts have already prepared a comprehensive guide to Hearthstone betting! Before we get to the meat of our guide, let’s talk about the gameplay! Hearthstone is a turn-based card game where two players battle each other using constructed decks of 30 cards.

Before a match starts, players get to choose one of 9 heroes. Each class comes with its own hero power (a re-castable spell that can be used throughout the match) and card choices. The goal is to destroy the enemy hero by taking his health down to zero.

There are many ways of winning a game of Hearthstone. All cards come with a mana cost, and each player starts the game with a single point of mana that increases by one every turn.

With that, players have to carefully manage their resources and choose when (and how) to use their cards. Moreover, there are 4 different categories of cards: minions, spells, weapons, and hero cards.

Each card category has its own strengths and weaknesses, and players frequently build their deck around a particular theme. For instance, some decks seek to swarm the board with low-cost minions, others aim to control the pace of the game through powerful spells, others yet rely on a single powerful combo to blindside their opponents.

Combine that with the fact that cards have different effects and rarities (Basic, Common, Rare, Epic, and Legendary), and there’s a ton of depth in a standard game of Hearthstone.

It’s worth noting that pros aren’t quite playing the same game as recreational players.

Most Hearthstone tournaments employ a Specialist competitive format, meaning that players can bring three 30-card decks to the event. All three decks must be from the same class.

They also must have a total of 25 cards in common, so—essentially—pros have to play slightly different versions of the same deck.

There’s also a matter of game format. Hearthstone comes in two types: Standard and Wild. Standard games only allow players to use basic and classic cards as well as all the cards released in the last 2 years.

Meanwhile, Wild comes with no such limitations, so players are free to build the deck they want.

There are tournaments for both game formats, but most serious events prefer Standard, as it provides a much more balanced experience. And if you’re looking to get into Hearthstone betting, you can’t go wrong with Standard tournaments. 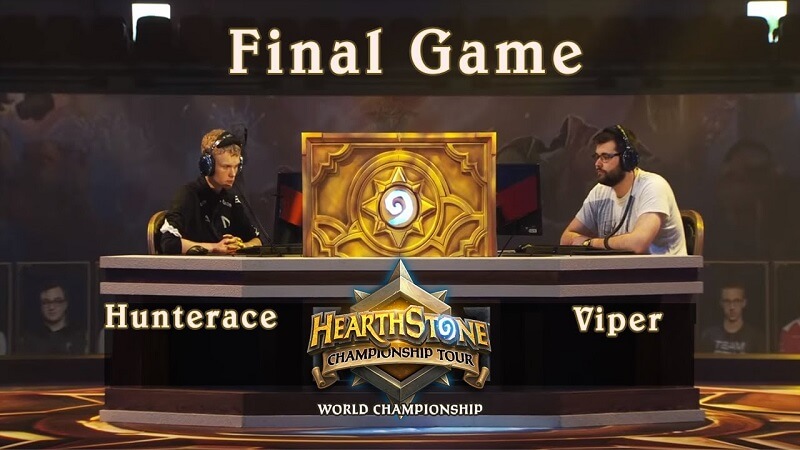 As good as it is to get a feel for Hearthstone gameplay and competitive format, you also need a place to put that knowledge to good use. And that means following Hearthstone tournaments.

The digital card game scene is filled with events and competitions—so much so that it can be challenging to keep up with it.

Of course, you don’t need to follow all of them at once, so here’s a quick crash course in Hearthstone tournaments that are worth watching!

Hearthstone Grandmasters is the premier league organized by Blizzard Entertainment.

Each region plays two eight-week seasons where pros battle each other in 1v1 best-of-three Specialist matches.

At the end of the year, Hearthstone Grandmasters comes to an explosive conclusion in the shape of thrilling global finals.

There, the top-2 players from each region will meet up with two Gold Series Champions from China to fight for fame, glory, and a piece of the $500,000 prize pool. And if that doesn’t make a good environment for Hearthstone betting, we don’t know what does!

Of course, every premier league should come with a strong secondary division. Which is exactly the niche that Hearthstone Masters seeks to fill!

This competition includes three massive tournaments with accomplished pros and promising up-and-comers from all three regions.

Each Hearthstone Masters tournaments has approximately 300 players fighting for their share of a $250,000 prize pool and a chance to qualify for the Grandmasters league, making it the second most important event in the scene.

The Hearthstone circuit is very open to third-part tournaments, so there are hundreds of events of different scale and magnitude taking place all over the world. Granted, some of them are too small for betting.

However, there’s a handful of reputable tournament organizers like WCG, StarLadder, and ESP Gaming that made a name for themselves by setting up quality Hearthstone events. And while these won’t measure up to official competitions, they can still serve as a great place to flex your gambling muscles.

Every gambling journey starts with a good betting site, and Hearthstone is no exception. You need to pick an esportsbook with competitive esports odds and transparent gambling practices—otherwise, you’re just setting yourself up for failure. That’s easier said than done, though.

The scene is filled with shady operators, and you have to be careful about the way you choose your gambling platform.

Fortunately, our experts have already done all the grunt work, so here are 3 quality Hearthstone betting sites!

Betway (read also our Betway review) has always been at the top of the esports gambling food chain. Founded in 2006, this platform made a name for itself with its broad esports coverage and varied betting markets.

Moreover, Betway treats its new customers with a €30 free bet, which is the perfect welcome bonus for experimenting with your gambling strategy without exposing yourself to unnecessary risks.

Throw in 24/7 customer support via email, phone, and live chat, and Betway is an excellent choice for betting on Hearthstone matches.

Netbet (read also our Netbet review) presents another viable option. This site is very quick on its feet, so you can expect it to cover a wide range of Hearthstone tournaments.

Last but not least, Netbet comes with fluid iOS and Android apps, so you will have no issues using it on mobile devices.

Bet-at-Home is a part of the bookmaking old guard. Founded way back in 1999, this operator has years of experience providing quality gambling services.

On top of that, Bet-at-Home is very diligent about setting up its customers with generous promotion, and you can extract a lot of value out of excellent welcome offers like a 50% deposit bonus up to €100.

Usually, such a reputable bookmaker wouldn’t have a ton of esports markets, but that’s not the case with Bet-at-Home, and you can indulge yourself in numerous Hearthstone gambling offers.

Hearthstone is one of the most exciting and unpredictable esports out there.

Every match comes with numerous twists and turns that keep both players and spectators on the edge of their seat. With that, few things can match the thrill of gambling on Hearthstone matches.

Combine that with the fact that many bookmakers provide generous Hearthstone offers and solid esports betting bonuses, and it’s hard to come up with a better game to advance your gambling career!