Devikins is a JRPG-inspired, turn-based RPG game. The game centres around the Devikins, cute yet creepy characters in the form of collectible NFTs. Players can collect them, train them, breed them and use them to earn the associated crypto coin, the Devicoin or DVK. The whole project is based on the Tron network, and compatible with the Klever wallet.

The up-and-coming NFT game combines PvP and PvE elements at different stages of release, with the PvE being available to play first, and the further PvP mechanics following further down the roadmap.

Devicoin is the main token underpinning this game. The token is used as a reward for playing the game, doing well in competitions, and so on, as well as selling and staking the NFTs of the game. As such there are multiple ways to earn the coin, which needs to be stored in a Klever wallet along with the Devikins NFTs themselves.

The coins can also be spent buying more Devikins, taking advantage of in-game items, VIP passes, and of course to pay for certain game mechanic fees (the same way the Ethereum network requires gas fees to be paid). The game is heavily centred around a multi-faceted token distribution with several different channels for both earning and using the DVT token, while the gameplay itself of course centres around the Devikins NFTs.

Speaking of said NFTs, the game uses unique NFTs whose appearance differs based on their unique stats. Genes, ancestry, personality, and affinities determine both how the Devikins perform in battle and in competitions, and their appearance. The genes consist of six different indicators, while there are five different ancestry lines that Devikins can belong to. In total, there are enough unique aspects to make it unlikely that a Devikin will be identical to another. There is a near-infinite amount that can be bred, meaning players can keep going for better and better ones to max out their team’s performance.

As mentioned, Devikins is an RPG crypto game. It uses round-based combat where players fight either other players or monsters in order to secure loot, experience, and prestige. Players can also breed their Devikins by combining two of them and hoping for the best. The Devikins can also be sold and bought in the marketplace.

New ones – bought or bred – first need to be raised to adulthood before they can be used in combat. Gameplay to raise the Devikins is similar to raising a Tamagotchi, where players have to take care of their babies and fulfil their needs in a timely manner. There is a simple story underpinning the game’s universe, with a promise from the devs to expand it as time goes on. At launch, players will be somewhat limited with the gameplay options they have access to, as phase 1 of the release will only contain scavenger missions as the first taste of gameplay. 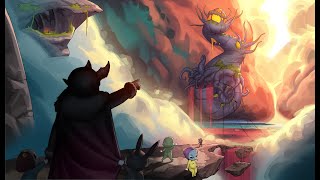