Guild of Guardians: Multiplayer RPG with Play to Earn NFTs

Guild of Guardians is a free-to-play mobile RPG based on blockchain technology. It heavily relies on NFTs for its gameplay, making it one of the many popular NFT games out there at the moment. Players can play for free and earn heroes, equipment, and items without needing to invest anything upfront – and their rewards come in the form of NFTs that they own.

They can either sell, keep or even use them in the game, in order to build their perfect team of titular ‘Guardians’ in order to rise up the ranks of a guild. Of course, winning more often means more and better rewards, giving the game fair earning potential.

At the moment, Guild of Guardians isn’t available to play to the broader public yet, as the game is in a late development stage. Users have already had the chance to buy the available founders packs and heroes on the website. So while the starting NFTs have been minted already, their owners haven’t got too much use for them yet. Guild of Guardians release date is slated for sometime in early 2022.

While the game itself isn’t out yet, we do know a fair few things about it. Players will form teams of heroes to fight in dungeons. It’ll be a comparison of skills and strategy as well as game knowledge, since things like composition and synergy are important. You can expect elements like factions, classes, and elements as well as common RPG aspects like roles – tanks, healers, support and DPS. Players will need to manage things like healing and damage output while keeping an eye on the opponent’s moves.

Beyond base combat, players can expect raids, PVP, land-centric gameplay, user-generated dungeons, and eventually potentially even a global esports tournament and esports scene at some point.

The Crypto Behind It

Guild of Guardians NFTs are unique ERC-721 tokens on the Ethereum network. The game also implements Immutable X as a scaling solution. The only compatible wallet at the moment is MetaMask, though the game will work on just about any browser, including Chrome, Firefox, Edge and Brave.

By using the layer 2 solution Immutable X, Guild of Guardians provides both the security of a normal Ethereum-based game, and the convenience of skipping the immense gas fees that cripple the main Ethereum network at the moment. While users will still need to pay in order to buy NFTs from other users, they don’t need to worry about the transaction fees driving up the cost.

As with typical play-to-earn games, users can get rewarded for playing. Both with NFTs and by earning some of the game’s native tokens, both of which will be tradable. As such, all players will be part of the ecosystem of the game, with their ownership of tokens being central.

Guild of Guardians token itself (Gems, an ERC-20 token) will also be used as a form of governance tool – holders of more Gems will receive larger shares of community rewards, which in turn of course encourages users to participate and play more, for better rewards, and potentially even a voice in community-led decisions. 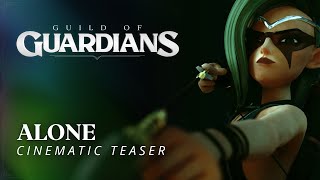