Kingdom Karnage is a turn-based card game where each player tries to sabotage the competitor’s heroes before they win the game. Each player has an army of 30 cards, and the mission is to combat the other army. Developed by Kepithor Studios, Kingdom Karnage gives you the ability to test out your decks and tactics against other real-life players. The game is not your typical card game – it is one of the best play-to-earn NFT games.

The game has a website and an in-game shop to buy the equipment and assets. The game supports a browser, Google Play, and Steam. If you plan on buying the assets or the equipment, Kingdom Karnage doesn’t accept fiat currency but any other major cryptocurrency.

The game involves card trading, and players can give their cards special characters to participate in in-game battles. Players can also win different assets alongside having fun playing cards. Ideally, the game has 120 missions. A player earns a JENJ backed token for each mission that can trade in the marketplace. The missions can stretch to 200, implying that a player can earn up to 200 JENJ backed fungible tokens.

You can play this animated turn-based combat crypto game in the following modes:

There are 9 dungeons in the game. As players defeat their enemies, they get to collect enchanted coins, which altogether help to upgrade character cards’ rarity scores. Defeating powerful enemies earns players some cards, equipment, heroes, and in-game currencies.

All levels of the campaign modes are accessible to all players. The mode allows players to discover the abilities of their character cards and the game’s technicalities.

The mode allows users to challenge the current king to a 1v1 match. When players win, they take the king’s crown and collect coins from other challengers.

The PVP mode works so that users get to participate in weekly and monthly battles. Users can climb up the ranks based on their performance in this mode. Most importantly, winners pocket awards such as coins, equipment, and cards.

There are many ways to earn as you play. Unlike other games, you don’t need to stake any money before playing. The primary earning method is collecting as many cards and equipment and then selling them in the marketplace. Remember, the rarer and unique your character cards are, the higher their value in the marketplace.

You also earn many special campaign clearance rewards after completing levels 15, 20, 25. You need to request your rewards via the Discord or Telegram channels manually. Clearing out dungeons as fast as possible can also earn you high rewards.

Every month, 10 weapons and 10 pieces of armor are given to winners who manage to defeat the King of Karnage on all 10 levels. These items are limited and only issued in rare circumstances, so earning them means that your character cards gain high value.

It is also possible to buy cards and other rare items. The good thing with the platform is that you can buy now, hoard, and then sell later when the game gains more popularity, and the items have gained more value.

The $KKT token runs the economy of Kingdom Karnage. You can use the coin to trade assets in the in-game auction house. You earn tokens by participating in voting, renting the Catacomb keys, or paying other players to play the game for you. 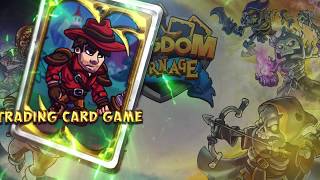