Join the Gold Rush – What is the Prospectors Game?

Ever wanted to take part in a gold rush? Well, now’s your chance as the Prospectors crypto game lets you do exactly that. Pretty apt, as many analysts have said that the rush to buy cryptos is similar to a gold rush!

Our Prospectors review found that this is an awesome crypto game. While it might look like a 19th-century gold rush, it’s actually up to date with the latest blockchain tech to give you an amazing way to play to earn. So load up your wagons and let’s get digging for some crypto gold!

On the surface, Prospectors looks and plays like many other kinds of massively multiplayer online strategy games. However, it’s based on the WAX EOSIO blockchain meaning that you’ll get rewards for how you progress in the game. Plus it’s worth noting that this is largely an economic strategy game which means that you’ll be spending more time trading, building, and mining rather than being locked in battles with your opponents.

Prospectors is fully playable direct from your web browser and you’ll have to use a compatible wallet to store any tokens that you earn. It’s important to note that Prospectors is still only in its early stages and at the moment only features two gaming worlds: Wild West and Yukon, but there are plans to create at least two more playable worlds along with a cool railway mechanic in the coming months.

Unsurprisingly the focal point of the game is to scour the landscape in search of gold. However, this can be a pretty time-consuming affair as there’ll be other assets hidden underground in the rough and ready terrain of the Wild West. As such, there’s every chance that your digging could uncover other commodities like clay and coal. The good news is that you can combine these commodities with other assets like wood and stone to make buildings and even create special items.

You have a workforce of three different people you can use to complete various objectives. There’s also the option to assign work to other players if you’re feeling like a true capitalist.

As this is a crypto game, it features its own virtual in-game currency called Prospectors Gold  (PGL). This Prospectors Gold is randomly assigned in the terrain and it’s also logged onto the blockchain technology. These kinds of tokens are limited in number to just 220,000,000 tokens – both mined and unmined. About half of this number is unmined and it’s your job to dig it out of the ground. These kinds of Prospectors tokens form the main economic basis of the whole game.

Like most crypto NFT games, Prospectors features a range of NFTs. These cover things like the actual plots of land in the game meaning that your ownership of a certain territory will be logged on the blockchain – definitely useful for contesting any gold found underground.

But there are many more ways to pick up NFTs. For example, the first anniversary of the game saw the developers releasing a limited-edition set of NFTs on the EOS network. It was kind of a reward for those early converts to the game and such collectible card NFTs were randomly distributed among the players.

Most people who pick up one of the NFTs from Prospectors will trade them in on the Simple Market NFT marketplace – one of the most common trading platforms on the EOS network. 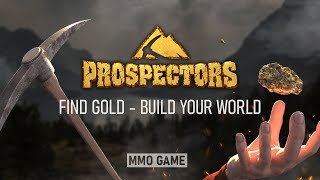