Following a Reddit ‘AMA’ with Bethesda Game Studios’ Creative Director, Todd Howard, it was revealed that ’11 million’ gamers had played Fallout 76. It came as a surprise because, for the most part, the Fallout community has never really warmed to the idea of Fallout 76. Regardless, it seems that the post-apocalyptic MMO title has paid off for Bethesda, and as time goes on, it continues to do so. As we move into the closing weeks of the Fallout 76 2021 calendar, we’re left wondering what will happen to Fallout 76 in 2022? After all, throughout the course of this year, some promises were broken, and some were delivered upon in earnest. Generally, the numbers are on the up, which is nothing but a good thing, but what are brand new players coming into as we leave 2021 and move into the beyond?

This year, we saw vast swathes of content being poured into Fallout 76. Although it took a while for the wheels to begin turning in Appalachia, once the train had left the station, it began rolling forward with great gusto. At the start of the year, we saw the Locked and Loaded expansion enter the fray, following the Fallout 76: Steel Dawn update. Once upon a time, Fallout 76 was built on the emptiest wasteland imaginable, but now, these updates inject fresh life into the game with each iteration.

In July of this year, the Fallout 76 Steel Reign content was added, offering players an exciting Brotherhood of Steel experience. Then, in September, we experienced the latest major update, Fallout Worlds. This expansion introduced custom servers into the game, an interesting if underutilised concept. In December, fans will experience the Night of the Moth update, the tenth major update for Fallout 76 since it launched in 2018.

The Fallout 76 2021 calendar was a packed one, but it’s nothing compared to what we’ve been promised for 2022. Firstly, fans of the sprawling, open-world MMO will be leaving Appalachia for the first time ever, with the delivery of The Pitt ‘Expedition’ DLC. Although we don’t know much at the moment, this will be our first ‘out-of-map’ expansion, a concept that has existed within Bethesda’s titles for several years.

In The Pitt, we’ll be travelling to Pittsburgh, the setting of the DLC of the same name from Fallout 3, released in 2009. However, this Fallout 76 update is yet to be explained fully, as all we’ve been treated to so far is a brief (but exciting) teaser trailer: 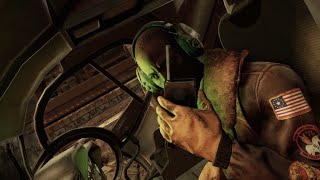 Furthermore, in the Fallout 76 2022 calendar, we’re finally seeing the arrival of aliens in Appalachia, coming in with the Tales from the Stars update. Since Day One, fans have been awaiting the presence of these sci-fi, never-before-seen characters, and their exact mission in Appalachia is as of yet unknown. While we’ve seen alien races featured in Fallout 3 (and briefly in Fallout 4), we can only take wild guesses as to the depth of the alien-based content coming to Fallout 76 in 2022.

Finally, there are the quality of life improvements that are coming thick and fast to Fallout 76. While we won’t be seeing a Fallout 76 offline mode, or the introduction of a Fallout 76 crossplay function, we’re still being somewhat spoiled in the coming months.

For instance, Bethesda has already promised an upgrade to the in-game Legendary crafting and reward systems, the delivery of C.A.M.P pets, more customisation options, and an overhaul to all in-game events. While 2020 left fans asking, “Is Fallout 76 worth it,” 2022 will be answering the question with a resounding, “Yes, it is.”

We’ll see you in Appalachia!